[pics incl] [EDITED: 10/17/13 12:00pmMT] Wanna see some very interesting, yet very scary images? I had Jeff take some pictures of the screen… I’ll try to give plenty of details but feel free to ask questions… if it was “private” it wouldn’t be on my blog 😉

After some questions, I added some graphics to the images to help you “see” what I am talking about. AND, YES, you can show other people… I get it, really, I do! It’s one of those morbid curiosity things! 🙂 AND, I know many of ya’ll had/have me on prayer lists and this makes a nice visual to go along with your crazy story of how I am doing. 🙂

Basically, I have been having pain again for the past 10 days or so [ http://blog.scottsontherocks.com/blog/2013/10/16/mri-scan-101613/ ] but it’s “not quite” the same as it has been in the past. It’s hard to explain but it’s sharp enough it often takes my breath away but usually only lasts a short time (several seconds but lately lasting much longer, last night was several hours). However, it is significantly enough that it stops me in my tracks from doing any type of “inversion” of my head. It’s harder than you might think, to try and unload the dishwasher or washer/dryer, without tilting your head down/sideways even ever so slightly. [ 🙂 go ahead… try it! 🙂 ] It has all but prevented me from putting/getting items from lower cabinets. This is all new because, as I have said before, as of a couple of weeks ago, I was plugging right along doing these things (maybe slower than before but it was getting done).

I had the MRI scan (below). Comparing these results to the previous scans, they are pretty much the same and more importantly, NOT WORSE. Based on this information, we are being cautiously optimistic that maybe the pains are being caused by those tiny blood vessels trying to reassert themselves (or as I keep saying… pistons are refiring 🙂 ). Using that as my assumption, I’m just gonna keep on with how we’ve been proceeding all along, slow and steady. Hopefully, in time (and probably a lot of time), at least a portion of these blood vessels will start providing relief to the left side.

TRYING TO EXPLAIN THE SCANS: Imagine this… I am laying down on my back, and you are looking through my feet toward my brain. Therefore, my left brain is on YOUR right side. GOT IT?! The first scan is of bloodflow, where WHITE is the blood and it’s GOOD to see the white. See “no white” on the left (or your right)? That’s where the blockage is located. Imagine that the left side should be a mirror image of the right side. The second scan shows a small dark area on the left (your right)… that’s THE BLOCKAGE. In those scans in the first few days in April, this area was much larger and contained visible blood leakage, that is gone and the clot remains. 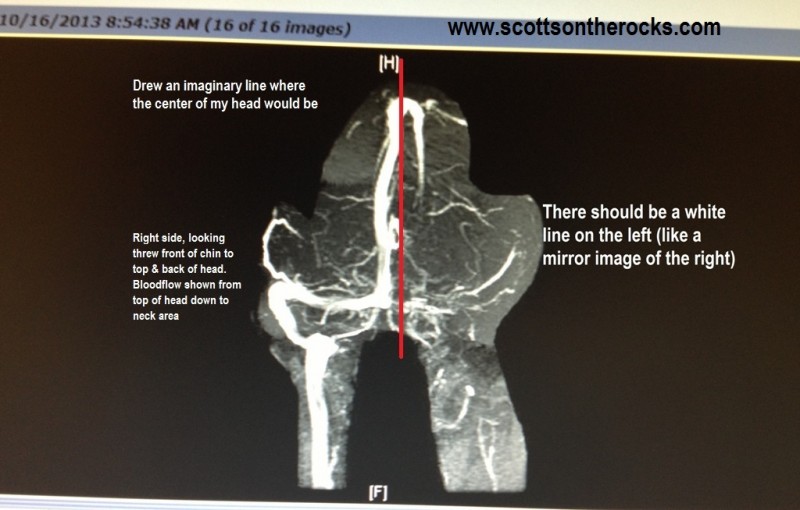 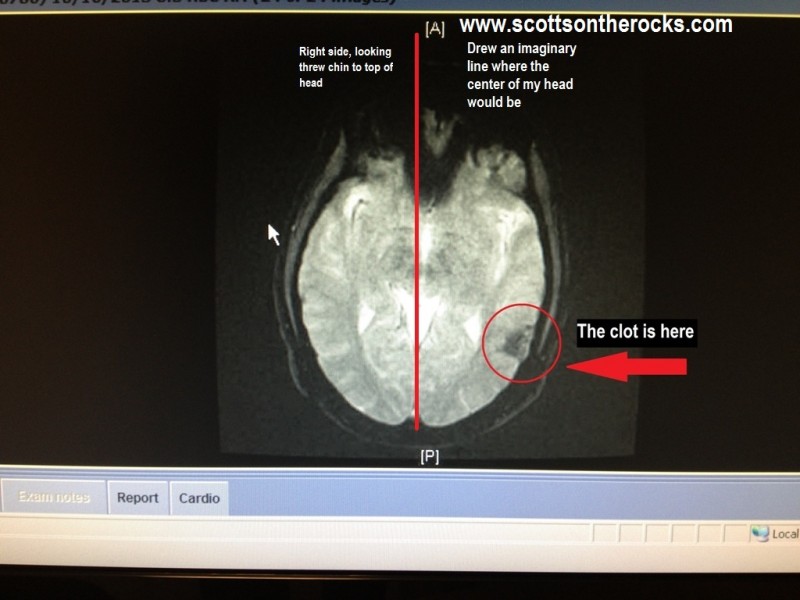 This entry was posted in TAZ. Bookmark the permalink.