As of 06/17/15 4:30pm CT, William and I are at Deidra’s parents (Don & Robbie Whitley) in Morales, TX.  A tornado came through about 7:00pm CT last night and took down some poles 1/4 mile from house and we lost power.  It came back on about 4:45am but the power company just called to say it’s be a couple days before they could restore?!

I have lots on photos and “stories” from our visits in Lubbock, Moulton, Shiner and Morales.  However, I do not have phone service.  We randomly have a bit of wi-fi between bands of storms.  I am using Robbie’s phone to post (FYI, Deidra is flooded in at her place in Edna.

We drove out a few miles to the “highest place that floods” in their Suburban.  There are 6 ways out, and all 6 are flooded.  Highway 59 is closed both ways at El Campo.  If this will let me upload the pictures, then you can see that I won’t be leaving in my little car ANYTIME soon.  if it’s not visible, then I can only write text and not images, look for those later in the week, if I get out.

These low pressures are wreaking havoc on my brain pain.  For the most part but every once in a while I get stopped in my tracks in pain.  Based on this new experience, I will NOT be driving long stretches nor driving in this crazy weather!!

At 7:00pm we went out again and roads are still covered. I’m not gonna try again tonight, so maybe tomorrow.

As of 10:00pm, three of the rivers HAVE NOT crested, and are expect later tomorrow.  I THINK This is the Navidad River, the Lavaca River, is nearby to the west and the Brazos is the other that is flooding the roads. 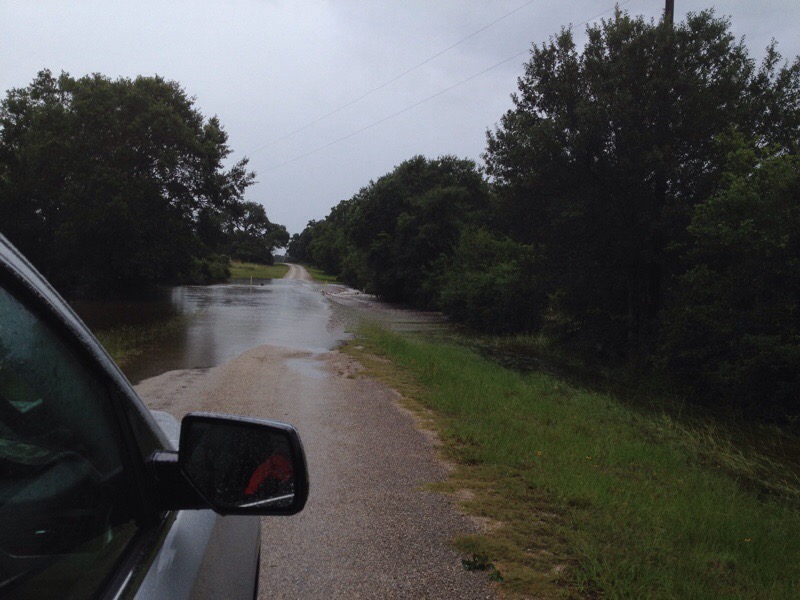 These are some of the road closures blocking the roads (not all are shown)!

One Response to Waterlogged in Morales, TX