Today Is One Of THOSE Days

[pics incl] Anyone with kids has had “one of those days” where it just kind of starts off wrong and gets worse….  Today exploded into a “comedy of sorts”  It all started with a bug bite on Courtney’s hand…. or so we thought.  It’s not the first time she’s had crazy swelling and I react the same way but THIS time… it’s a bit huge so when she walked in at 7:30 am and asked Jeff “at what point should I be worried…?” he took her straight to Urgent Care.  I was driving William to school and Ashley still had class so I swung by and grabbed her… but then there was that “lawn care appointment.”  I had yet to see THIS photo (or Courtney’s hand) so when Jeff said Courtney had a bug bite, I said “Courtney is an ADULT.  Leave her at the Urgent Care and go meet the lawn guy”  Oh, stop growling at me, she only LOOKS 12 and she IS an ADULT and Urgent Care is like 1.1 miles from our house 😉 and I was 2 minutes from the urgent care when I said it 😉  So “we switched places.”

They called Courtney’s name. It went something like this: “Need me to go back with you?” “Nah, it’s just a bug bite…” “…and you’re an adult?” “and there’s that” (actually, I think she waved at me in agreement) 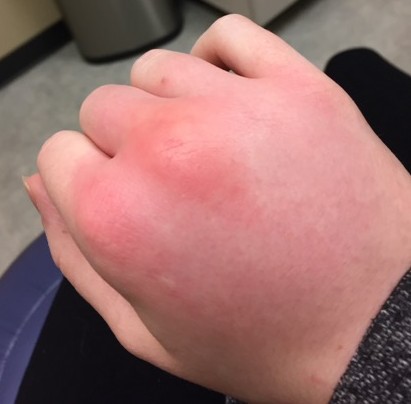 It was ALL DOWNHILL from there.  They promptly told her that the might have a staph infection (well, after seeing the specialist later THEY WEREN’T necessarily wrong, apparently MRSA presents itself looking like a bug bite… just like this photo!!!)  They gave her an antibiotic shot (one doubles for staph) and had x-rays of her hand and somewhere in here MY NAME was called to go to the back 😉 because some of the stuff they told her “required a more adultier adult” but then they took one look at me and realized… (yes… the same Urgent Care place as “my brain thing” so they clearly need to run away!) I’m not necessarily the adult here so we discussed “oh HOW ARE YOU doing?”  After they explained to us that this was possibly into her knuckles, they had talked to a specialist and he wanted to see her in the afternoon.  In the meantime, they drew a marker around the swelling, told her to go to ER if it got worse and wrapped her hand.

Good, because I actually have a doctor appointment in an hour… somewhere else 😉  It’s at my hematologist and they attempted to draw blood, the usual 3 stick attempt, so by the time they were done with me, both my hands were wrapped… LOOK we match! 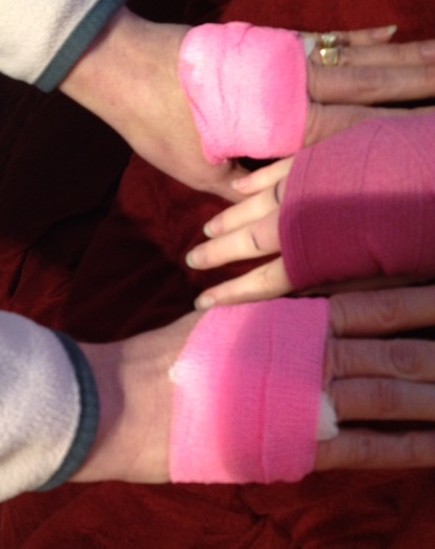 Courtney commented that “this is NOT how today was supposed to go, I have class, I have things I need to do.”  I said, “welcome to adulthood.”  There was some whining to which I responded with the, switching off to take Ashley to class and changing of the guard at the doctor and the lawn guy and the working from home “just in case” the specialist took longer because someone had to do carpool for William… “would you rather ‘Parenthood?’ ” 😆 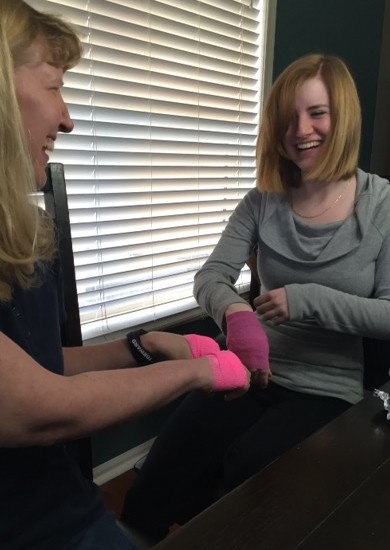 UPDATE:  The hand specialist saw Courtney, agreed that it “could” have been staph/MRSA but since they had given her a shot already, any bloodwork now is pointless.  He was sure it was a severe infection regardless and wanted her on oral antibiotic as well and went ahead and made sure it was one that would work with MRSA (just in case).  While we were there, the red & swelling was well past the marker lines they had drawn but he was only slightly concerned and said it should start going down soon BUT, if it didn’t to go to ER (and call him).  He wants to hear from her Thursday.

NOTE UPDATE:  36 hours later, the RED has gone way down to just the center of her hand.  it’s still pretty swollen (hard to see in photos but it is).  Just imagine it being bright red OUTSIDE that marker line!?! 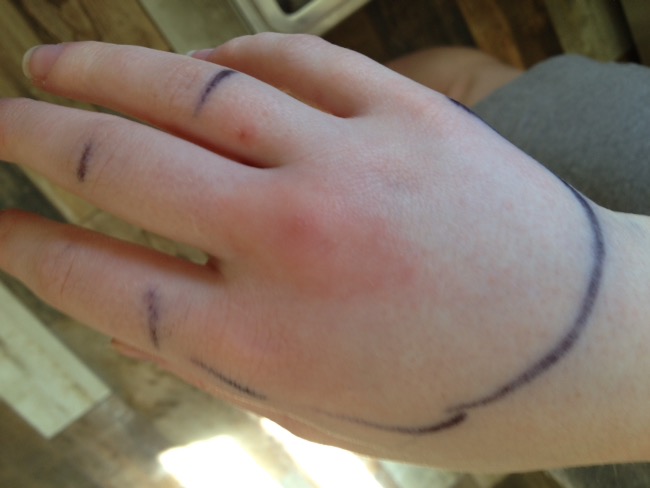 This entry was posted in Courtney, Jeff, TAZ. Bookmark the permalink.