[pics incl]  Josh showed up and with a straight face and all sincerity, I told him I fully intend to treat him like one of my kids.  I sat on the couch and told him to take down the Christmas tree 😉  You might think I’m kidding except you’d be forgetting that Abby put the decorations on the tree:http://blog.scottsontherocks.com/blog/2016/12/22/abby-did-it/ 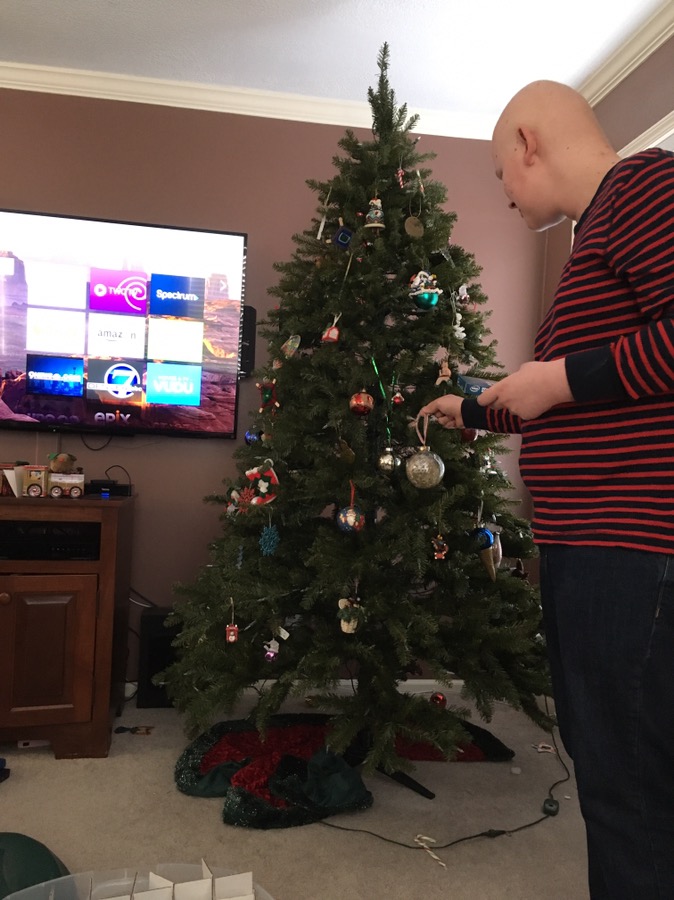 He actually only took a few off… so I could take my picture… thanks Josh!  Jeff gave him a “toy” first and he wanted to go see if it would work with the computer that he and his dad are working to design.
Many of ya’ll have asked about how Josh is feeling and even say you stop by their website, yah…  they’ve been a little busy moving over here to update but here is the link:  http://team-josh.com/

Josh had a siezure last week.  He told us, he feels glad the fire department is in the neighborhood because he feels they arrived quickly for him but he also said he doesn’t remember much.  He mentioned that he thinks he got up and “bullied” his way through the firemen to get away.  He says he gets to spend a good deal of time tomorrow in an MRI to check on things.  He was good humored about it all, bless his heart.  While his story made us giggle, Debbie’s will have you in stitches :  http://team-josh.com/index.php/2017/01/05/jan-4/

I’ll keep ya posted as we keep an eye on each other during the day!  Actually, when he arrived, he asked if I was still feeling sick (I had been running a fever & keeping my distance), when I said I was feeling better… great, big, giant bear hug!  Clearly, I can never get sick again… ever! 🙂

This entry was posted in Jeff, TAZ, William and tagged Hetherington, Scott. Bookmark the permalink.