The Next Generation of Pinochle Players

[pics incl]  Everyone in “the Bacon family” grew up playing pinochle; learned to play before learning to walk.  My best friend Neil comes from a similar upbringing and we forced Jeff to sit down and learn pinochle in college [probably because we were sick of hearing “hey, let’s play 42” (dominoes)].  We created a monster.

Our kids are old enough now that over the past few years, they have taken an interest in learning.  Brain clot kinda slowed us all down but…

When my parents visit, we have always played and now can include or swap out with interested kids.  Scotty & Jacque also play… so ditto!  They were here Friday night and the cards and cheat sheet/ rules are still on the table.

Josh appeared today and everyone was still moving slow (not me, I was up) so we sat & chatted a while.  Since it’s Robotics season, I knew Will had some homework but said he could figure out how to manage that around hanging out w/ Josh.

William said to Josh, in his ‘super-fast-not-pausing-for-answers-or-breaths-voice’  “Do you wanna learn pinochle? You should learn pinochle.  I’m just gonna teach you pinochle, that way we can all play pinochle.”

Josh just looked at us, shrugged, and replied in the same  ‘super-fast-not-pausing-for-answers-or-breaths-voice’  “OK” 🙂

They sat at the table and I laughed because William was talking in a voice and tone that sound eerily like “college age Jeff trying to avoid chores”  Jeff agrees. 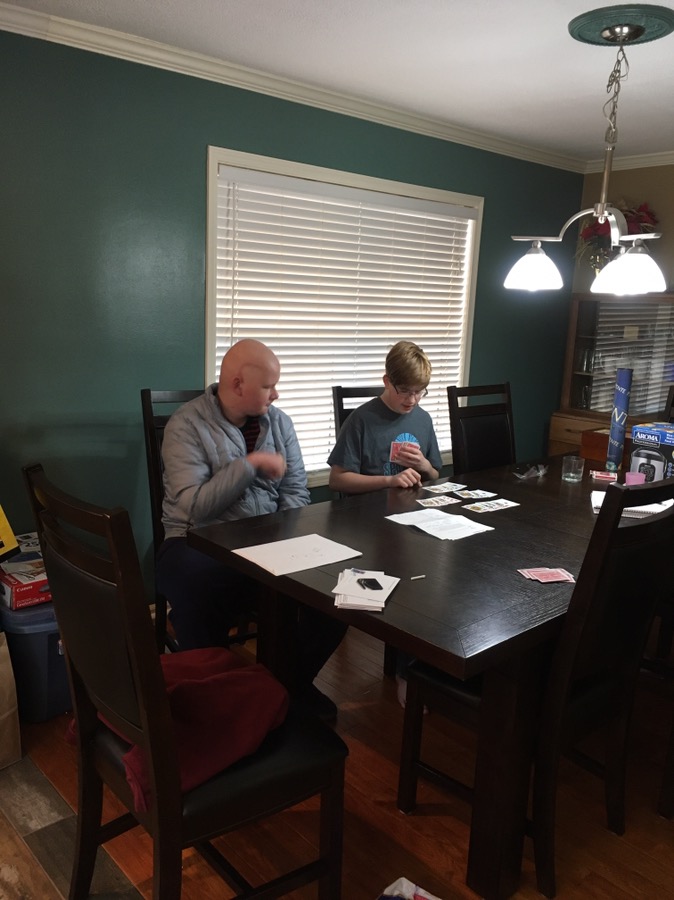 As you can imagine, the three of us were very interested in seeing how this was gonna play out.  yes, granted, we were playing heads up, but the argument here was, Al Bacon has the hand… go.  Josh took 40 of 50.  He said “beginner’s luck” and I may never play with him again!

One Response to The Next Generation of Pinochle Players