[pics incl] The STEM FRC robotics team was prepared to give Josh a tour. 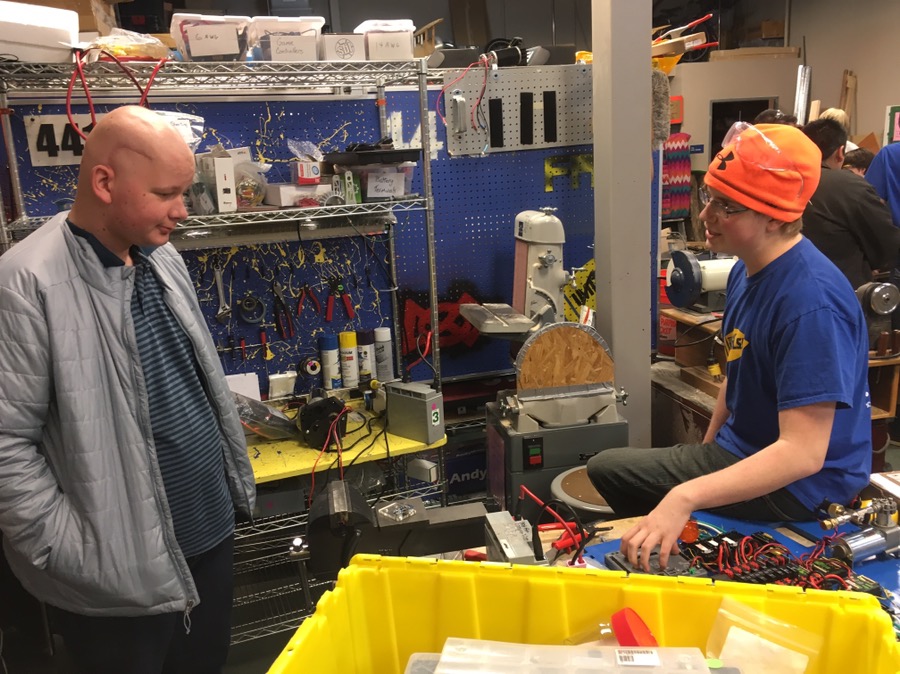 They laser created this sculpture for him. 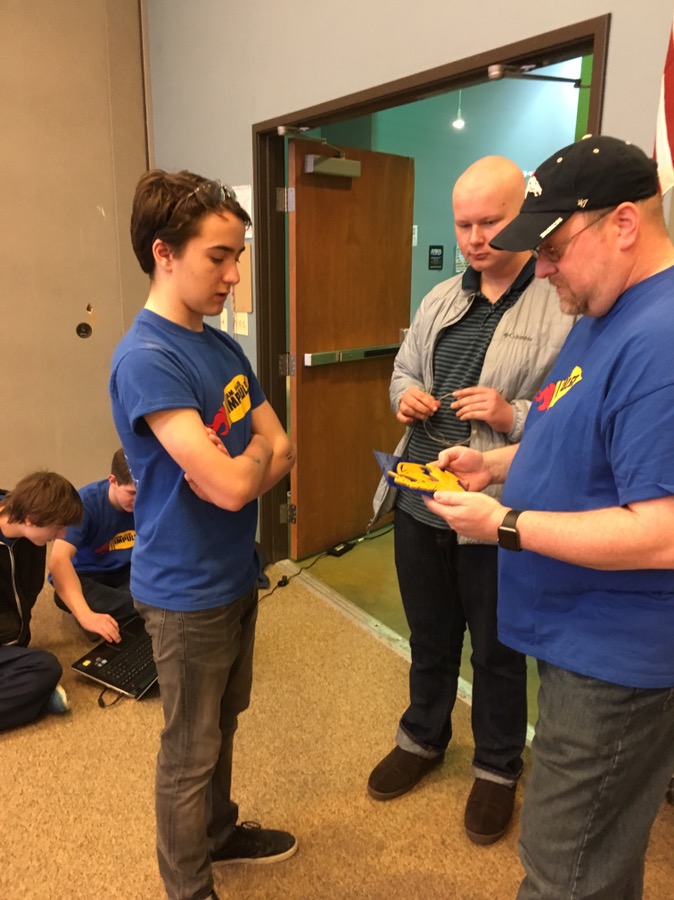 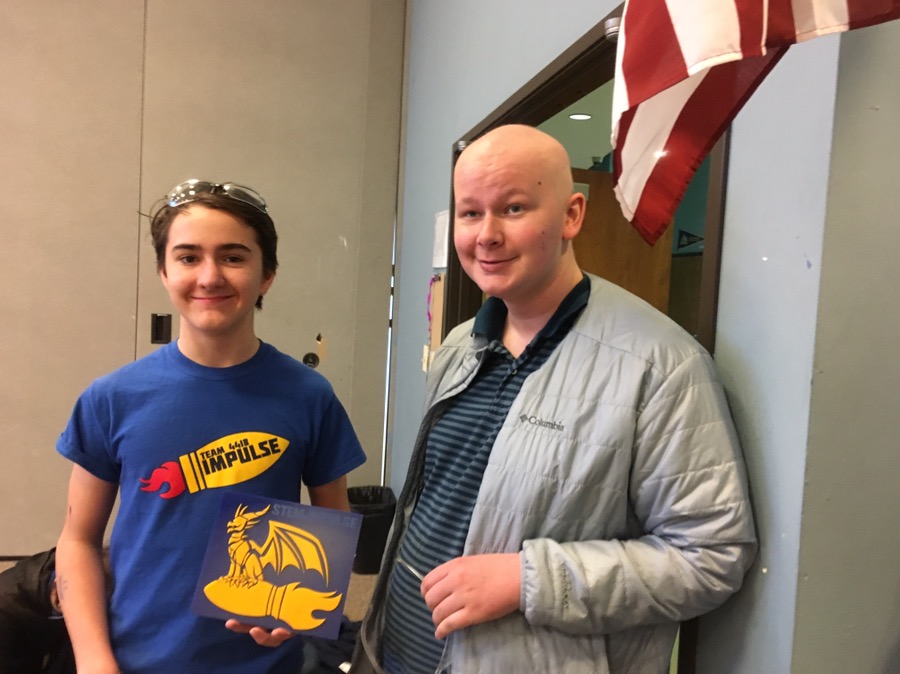 They have a fabrication “lab” and each of their robotics teams at the school, fabricats, parts etc.  [NOTE:  Josh also got to ask questions of team members that were dual-participants.  One team was building a submarine unit.]

At one point during his robotics software demonstration, another mom came in and casually pointed toward the poys and asked “OH, is he your son?” 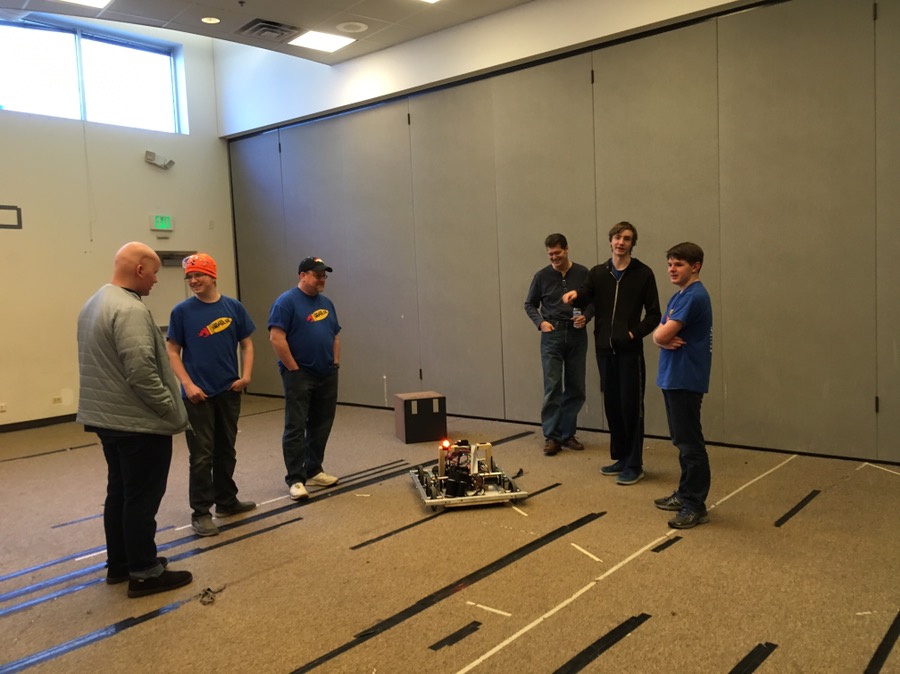 I thought she was pointing to Josh (and assumed since he’d clearly never been to Robotics) “OH, no, that is Josh, William is mine.”  She gave me the most confused and puzzled look… and trust me… I know the look… I’M THE ONE USUALLY GIVING THE LOOK.  “OH, he sometimes goes by Will” just made the look worse 😉  She pointed to Jeff and as if learning a new language said “Jeff?” and as I said yes she was clearly in “The Twilight Zone” “…the boy in the orange cap?” “yes, William. He sometimes goes by Will?” “the boy in the orange, I have lots of pictures of him with his father, Jeff” “Yes, Jeff is my husband” “the boy in the orange?” “ya know, you don’t know me, usually it’s me confusing people but I really feel like maybe I didn’t start this one? yes, I think?? the boy in orange is my son William? or Will, & that’s my husband Jeff? now I’m questioning me? The other boy is Josh” I said, let’s just stick to something I think I do know. she’s laughing and says something about BBQ & Jeff and “well, now I know I’m in the right place.”

NOW, all the boys are all “over there” and she starts telling me about her daughter and her funny last name and how funny it is to grow up with “funny last names…..” this starts MULTIPLE conversations

1) Jeff walks up and… “Hey, did you know that William can’t go by William, or even Will, or Walter at Robotics?”  [ah… talking to me…] “NO,NO, I did not or maybe do not remember that.”  “Funny story… There are several Will’s and William’s and…” so see the other boys with Josh & Will? One is William and the other is Walt.  so her confusion was genuine over “me thinking I am William’s mom” and MY William is “Scotty” at Robotics [and I “hear” that grin]

2) Jeff proceeds into his “I have three first names” instead of a last name and William “ditto” says he doesn’t mind going by “Scotty”  But this mom is mildly lamenting but jokingly about her last name.  But I say I doubt she has me beat, she doubts I have her beat…

Josh decides he is going to “judge” and she asks why “because my last name “sounds formal”  OK… we all agree, he’s actually got us there.  “Hetherington”  He wants to know hers “Fast”   Ooooh, so close, but he declares that I win.  “Wait, what’s yours?”  I’m so proud of Josh, half-giggle/smirk/snort, says “Bacon.” [http://blog.scottsontherocks.com/blog/2010/11/05/whats-in-a-nickname/]

3)  Somewhere in here she is still talking about BBQ.  Jeff bought this from a smokehouse but was talking about needing a new smoker.  At some point, most everyone walked ahead, but we 3 were slow, I said he was training William… (I’ll never catch on to this Scotty business)  and without blinking she just nonchalantly “OH does Jeff do all the cooking then?”  Josh… does his little half giggle “I’m not laughing” smirk  I faked a protest and told the truth 😉 http://blog.scottsontherocks.com/blog/2016/08/19/toast-its-not-for-dinner/

Later, someone asked Josh if he learned anything new, he said something along the lines of “no, it’s too much.”  honestly, I totally got it.  I asked the man if he’d give me a minute to translate.  Josh & I spoke that it was all such, sights, sounds, people, movement, explaining, that it was hard to LEARN.  not bad just “much”  he did ask questions of the submarine kids, but they were “few” and quieter.

So, I teased him that he was getting “fuzzy baby hair” and I was playing with his hair and said he has more now than Courtney did when she was a year old.  He did his little half-giggle thing.  We agreed that we DID learn, just maybe differently.  the GREAT thing is that no matter what, all the kids want EVERYONE to get something.  I was impressed to see each of the FRC, TSA, Best, etc teams working together and articulating their goals.  So the man was glad to hear “our ‘new’ answer”

… on the drive home…

We keep telling Josh that we will treat him “like one of our kids” and he has learned to treat me “like one of my kkids would treat me.”  Remember how I sometimes have trouble spelling?  “The other day when you were txt’ing me, you weren’t making any sense, I was about to tell you to ‘go take a nap’ [I don’t remember what he actually said, we were all laughing too hard]  Mum says I have to be nice…” Rolling laughter… Jeff and William are egging him on… actually at this point I am too.  Forget the little half-giggle thing, he’s being actively ENCOURAGED to commit insubordination! and being given TIPS! [sorry Debbie]

Continuing along the drive, Josh is now talking about how great our neighborhood is [now his neighborhood], every home unique, yards are bigger, everyone seems so friendly even if they don’t live on your street  (we are all “clearly you haven’t met all the neighbors”) and “I moved two door down from my friend.”  I abruptly spun around and over-dramatically “did you hear? he called ME, HIS friend!” William started to protest and I just pointed at William with “the point” only a mother can point at her son ;-P, Josh “half-giggle” but “now what?” (just shrug and nod and give in to her William… they both smirked)…and…the firestation is close by and really quick. [NOTE: he told us his version this day http://blog.scottsontherocks.com/blog/2017/01/15/the-next-generation-of-pinochle-players/]

“OH we know ALL about them… and Jeff talks about “the circular saw” and HIS finger he about sawed off” he was showing the scar to Josh… as we were pulling into Josh’s drive Tony has his back to us in the driveway, normally this would have prompted “loud horn honking” but the circular saw in his hand saved him…

…then he set it down, William and I are totally hollering at Jeff to “Honk the Horn!!!” Josh is quickly catching on 😉  Jeff “It’s not neighborly”, in unison “what neighborhood do you live in?!?”  Something about Rod & Lisa… to which I replied “…given the right circumstances, ‘drunken’ Rod would’ve taught Tony not to wear those sweat pants next door to Rod!!”

sigh… no horns were honked.. but Josh learned a LOT about who WILL honk at you when your back is turned (some of our neighbors have those EVIL silent hybrid cars…), the neighborhood list is long, but distinguished … there was giggling.