I’m sure you’ve all had them (or heard about them), the spellcheck that changed a word in a sentence, that actually changed the meaning or intent of your original word.  This can be confusing when it does something with positive and negative like [is vs. isn’t] but what do you do when it take a real word and replaces it w/ another real word?  Or takes YOUR “proper noun” and replaces it w/ a stupid real word that just “doesn’t quite fit”… enjoy 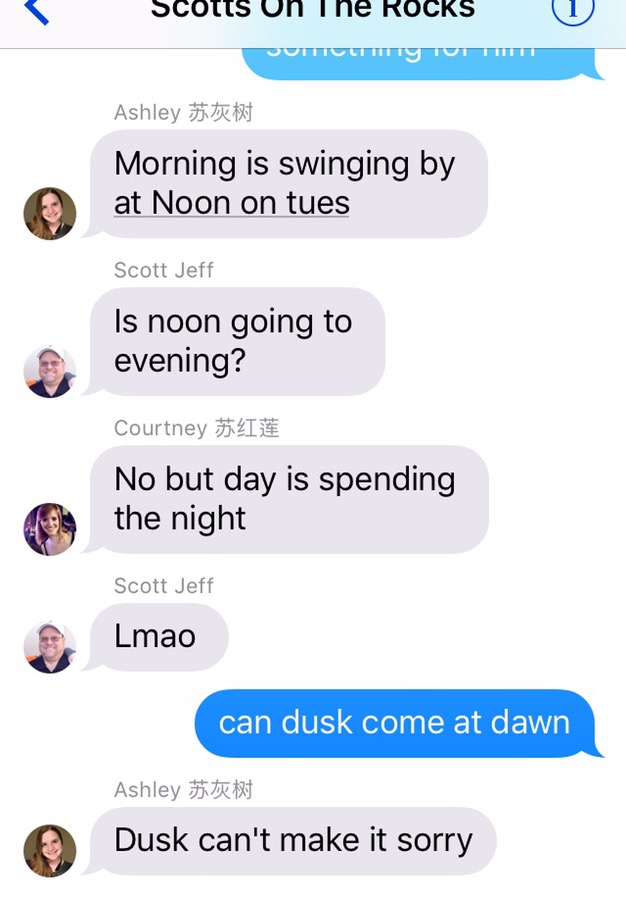 Now, Ashley had no idea that her spellcheck had “started this” She just thought we were… well… being normal… and she was amused and bantered back.  BUT WE HAD NO IDEA what she originally intended to to tell us.  It was many painful hours later before Courtney was sitting here in the living room while we were discussing “Tues plans” and told us the story from her point of view, she had asked Ashley earlier in the day, “did you ever clarify for them about morning?” but Ashley had taken that as “morning vs noon” not “morning vs Monina” and since Ashley had txt NOON (see above), she told Courtney yes.  but… No… she hadn’t “clarified morning vs Monina”, we were still clueless!

So folks, MONINA, will be stopping by at noon and we do not control the sunrise ;-P