[pics incl] Jeff has been going to VMWorld for many years. It’s a conference /Expo usually centered around VMWare (in English… it computer “cloud” stuff… we’ve been using it for 17-18+ years)… (NOTE: VMWare’s parent company is Dell Technologies, who also owns Dell Inc (ie laptops & computers)) and believe it or not 100’s of other companies!

VMWorld alternates periodically between Las Vegas and San Francisco. Every year we always say that I should go with him. As he usually makes reservations many months in advance, this year, we discussed me flying out with him a long time ago & made reservations. Flash forward…

We flew out to San Francisco for VMWorld 2019 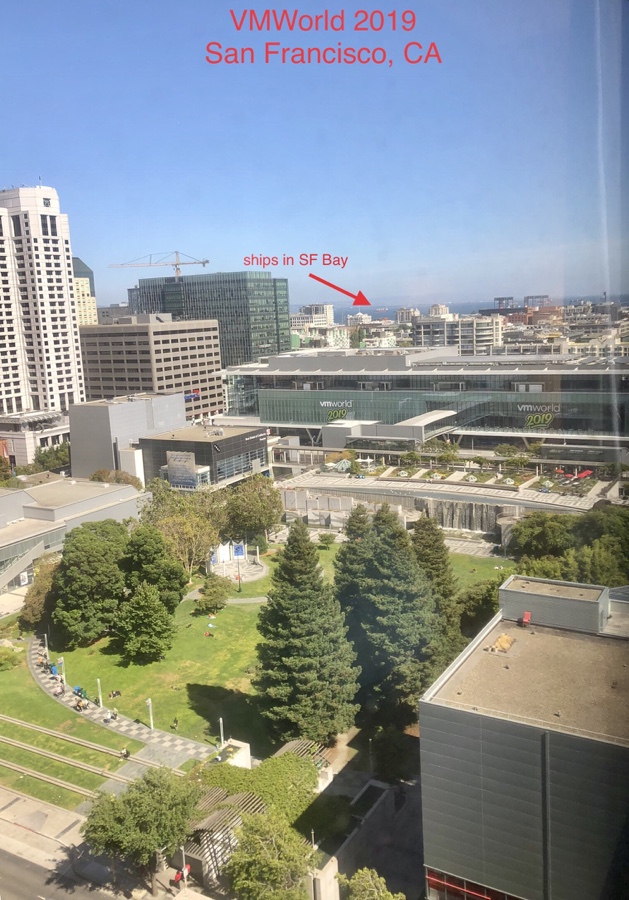 …and for those of you interested, Jeff has officially changed jobs and now works for….. VMWare (I can’t remember actual date but as of mid-July 2019)

We ran into some of his VMWare customers, and when they realized I wasn’t opposed to “talking shop,” we all went to dinner.

On the flight out, Jeff and I had been trying to figure out how many years he’s attended VMWorld…. at the moment we are thinking 2005? but I had also made the comment that I was pretty sure “we started using VMWare…. a whole kid ago.” I’m pretty sure we started using it before William was born, when we lived in the mountains…. however, it’s possible he was an infant… but I’m pretty sure we lived in the mountains. That kinda narrows it down to 2000-2001. We just weren’t sure when VMWare actually made an appearance in our lives… (I mean we KNOW when William did!) HAHAHAHA

At dinner, one of the guys gave an unsolicited brief history of VMware and used lots of acronyms and said things that honestly, stereotypically…. most wives would have found boring and annoying. But instead, I turned to Jeff and said… “So does that mean, it was 2000-2001 and not 2003?” Which made “guys at table” do a double-take in my general direction… with completely confused looks on their faces. I recognize it… it’s “she just hacked the secret password for all computer languages (or for geeky guys…. it’s the same look either way)…. or was that a coincidental comment?”

They stopped talking and looked at Jeff… who laughed. He explained “It’s true, she not only understands what we are talking about, she’s an IT nerd and has used VMWare.”

I’m in the club now.

Well… I was until they lost me. No, they didn’t start talking about something I didn’t understand…. they actually LOST ME. we were walking, crossed an intersection that was like a triangle and while I was avoiding stepping on a grate (I don’t step on grates!!! http://blog.scottsontherocks.com/blog/2016/11/05/dinner-out-110516/) The guys all went to one side of the triangle building and I had gone to the other. I was promptly LOST!!

This experience brought out the need for the invention of “the find-my-wife app” HAHAHAHA yes, yes… we have all that…

……. and I have a satellite GPS tracking beacon in my arm and an RFID chip on the back of my neck too HAHAHAHA (NO NOT REALLY!! but you know that was just soooo wrong it was funny!)

From that point forward, I was chaperoned well!