[pics incl] If you don’t know who Indigo Montoya is, stop what you ar doing and go watch The Princess Bride right now HAHAHAHA The Princess Bride (TPB) is one of those shows that is often playing at our house and referenced on a regular basis. [http://blog.scottsontherocks.com/blog/2017/03/28/we-have-an-rous/] and I even talked about it during my brain surgeries [http://blog.scottsontherocks.com/blog/2013/04/25/i-think-i-earned-a-brownie-point/]

On the way to NOLA, I was having a rough flight so Jeff just put it on TPB so I could just listen while being miserable.

Tonight, Jessica has been giving us a tour of some popular spots in the French Quarter but I needed FOOD. Despite being in the heart of a culinary hot spot, not much here has been available without shellfish. (at least in Galveston and SF, CA surf & turf could be ordered w/out the surf!) Needless to say… I’ve had a couple opportunities to have some FISH but otherwise I’ve had nothing but salad or dessert (I’ve taken to ordering bread pudding for substance and to sample varieties)… I’M HUNGRY!

We found a little Cafe that at least appeared to have options on the menu. Within seconds of receiving a drink menu, Jeff said “I don’t what ingredients but I’m ordering it because of the name!” It’s a drink called “My Name is Inigo Montoya” I insisted the server explain how she invented the drink (if she said something like… I couldn’t think of a name & someone else decided …. OR

She said “OK… Well, I dunno if you know the movie The Princess Bride…?” We all busted out laughing & interrupted her. Jeff explained we watched it on way down and we are all best friends now. HAHAHAHA When I said I’m allergic to shellfish she said they only have one fryer so EVERYTHING fried shares it. Soup & salad for me…. and I planned to get bread pudding dessert…. sigh…. until she said it’s fried. So sad! 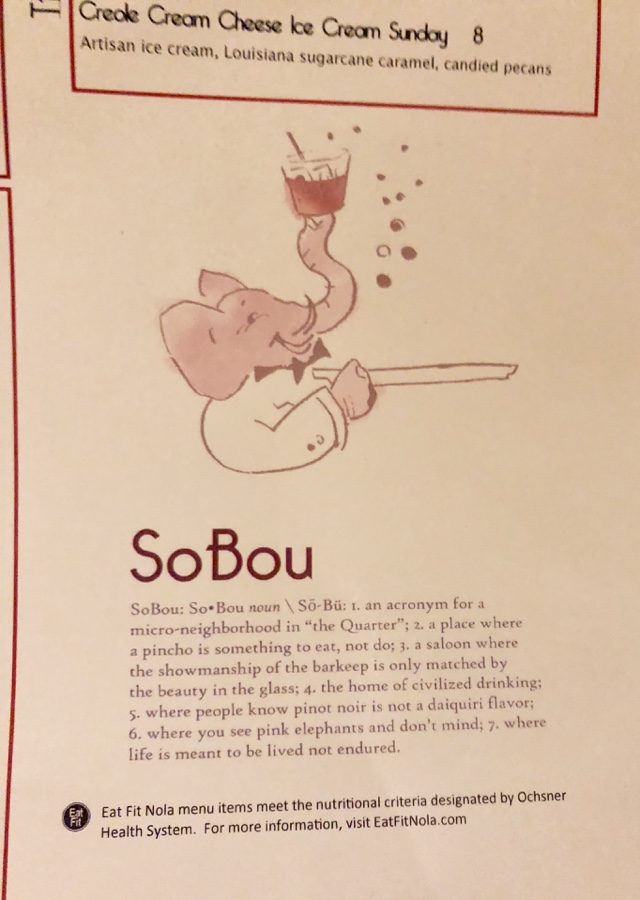 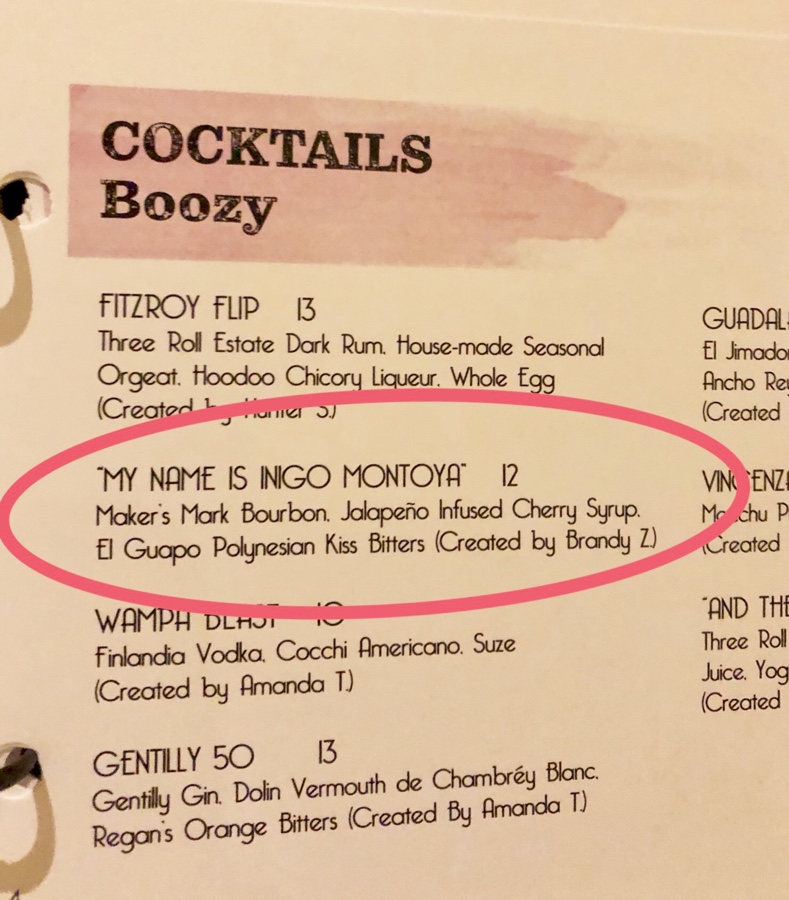 the drink us basically a VERY SPICY old fashioned 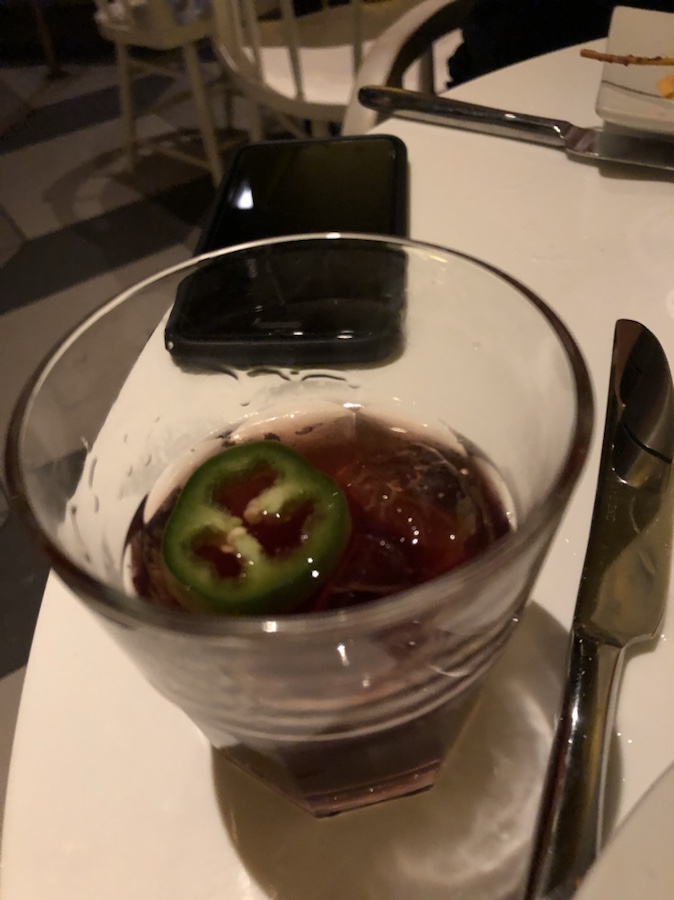 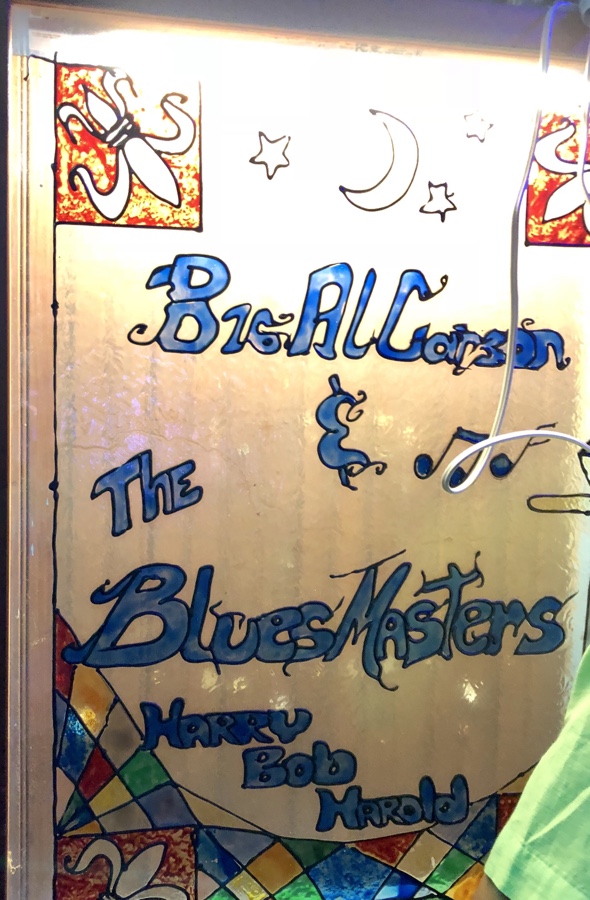 But I still needed FOOD….. we hunted down a good dessert place open late. It was recommended by the security guard that carded Jessica and wasn’t gonna let her into the Jass club at our hotel HAHAHAHA 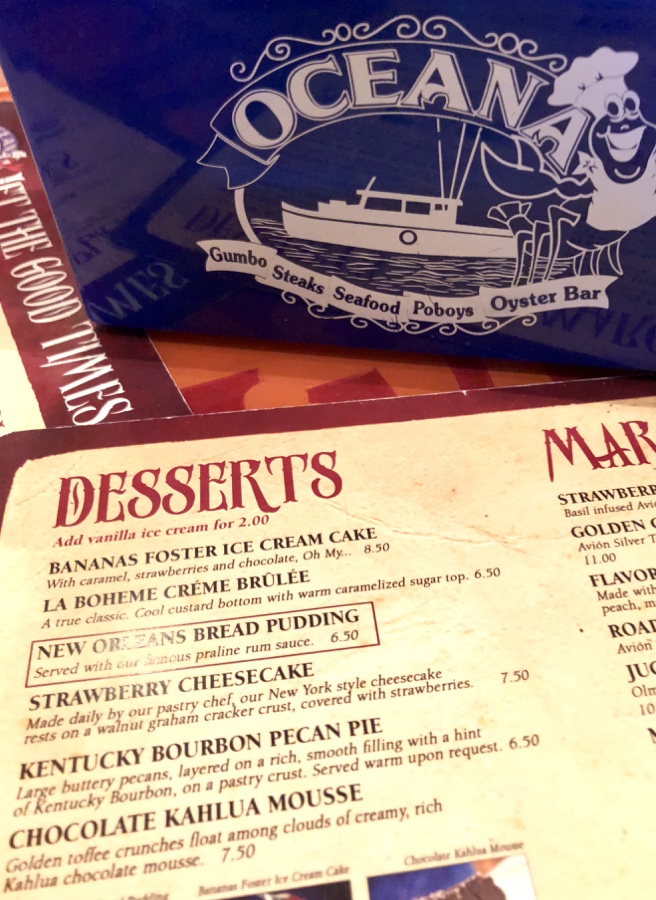 The next night we were still on a mission for food…. found a nicer restaurant with fish on menu. Even though we really weren’t dressed nice enough, we at least had collar shirt & I was in a sport dress, they sat us before it got crowded. The couple next to us was celebrating 40yrs so I chatted w/ them briefly.

We strolled around and found a dueling piano bar right about 9pm on Saturday so Piano Man was popular.

we returned to the blues jazz club from the night before and there was a group next to us w/ a woman celebrating her bday.

I don’t know if I’ve ever blog about the time about 14-15yr ago when I was walking into a doctor’s office and the girl behind the counter was reading Ripleys Believe It or Not. I walked in mid conversation of her saying “it says here the most common bday in world is Oct 5…. I wonder if that’s true?” I said I’d believe it, handed her my license HAHAHAHA (I’ve never verified that was a Ripleys book or etc but it was a funny scenerio) [NOTE: I did a quick search and got multiple answers…. looks like mid September is most popular in USA and late September for world. but that varied on topics and publication years so it’s possible the girl was reading an older BOOK making that data now about 20-25 yrs old minimum]

As I was leaving the club, I tipped the band and they recognized me from last night. I have on ear plugs so I couldn’t make out everything but suffice to say that long blonde hair stands out in a blues jazz club.

Last night while Jessica was walking at the speed of sound, she kept having to stop and wait in me as I was zig zagging and looking around. At one point Jeff motioned to a group up on a balcony overlooking Bourbon St and noticed they were tossing down Mardi Gras beads. There are notorious ways to collect beads on Bourbon St and he said “You should go over there and maybe they will throw you…. … … a bracelet…..” Jessica spewed her drink and I thought she was gonna wet her pants laughing. I have to concede: Jeff–1; TAZ–0 HAHAHAHA 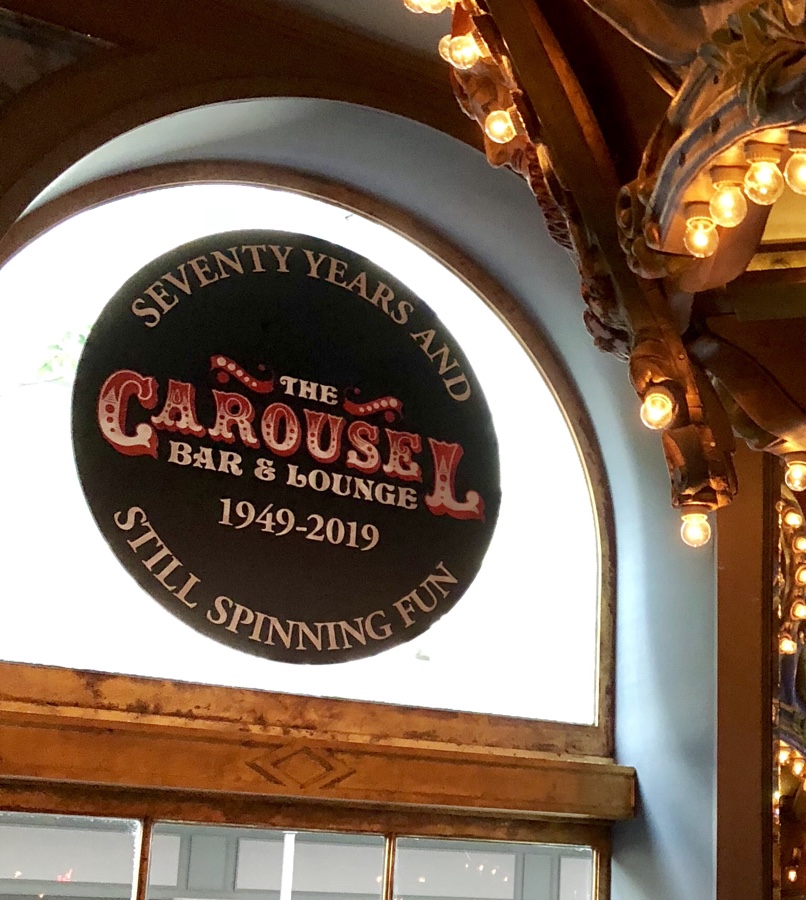 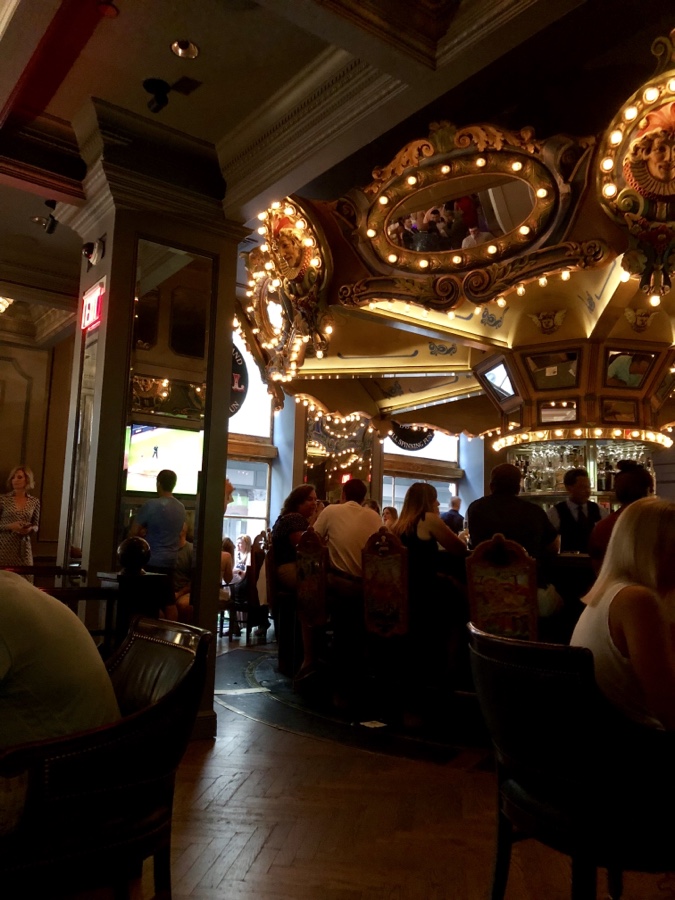 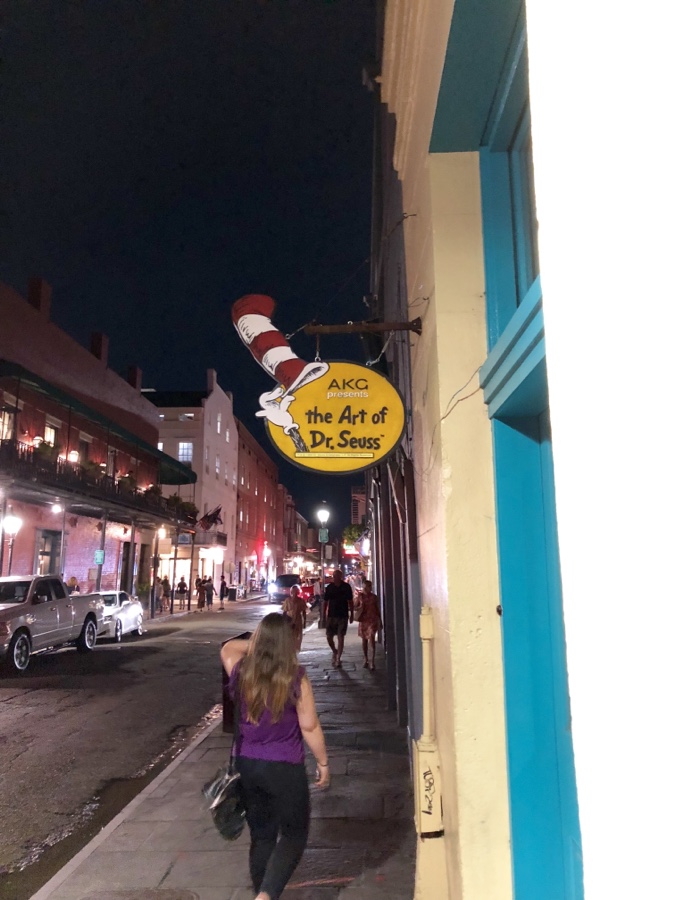 The Dr Suess store was closed so I didn’t get to look for a moss covered credenza! [ http://blog.scottsontherocks.com/blog/2019/08/08/another-dr-seuss-moment/]

This entry was posted in Jeff, TAZ and tagged Wyers. Bookmark the permalink.